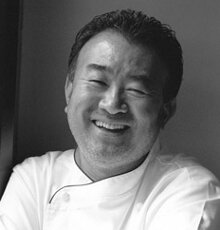 Tetsuya Wakuda was born and raised in Japan and only travelled to Australia at age 22 with a limited grasp of English in 19821. He first worked as a kitchen-hand in Sydney but soon after gained a position as a sushi chef at Tony Bilson's Kinsela. A large part of Tetsuya's classical French technique was trained here under Bilson. But the experience gave him more than just technical skills, “Tony gave me a chance to do other things...He taught me, but also gave me the confidence and opportunity to test a lot”.2

In 1989 Tetsuya's the restaurant was born as a tiny shopfront in the Sydney suburbs (relocated in 2000 to it's current location). From here he forged his unique fusion of Japanese and classical French technique and his passion for a welcoming and friendly brand of customer service that is the backbone of Tetsuya's success. Today Tetsuya Wakuda is internationally recognised and counts chefs such as Charlie Trotter and Ferran Adria3 as personal friends.

Number 8 in our list of the top ten restaurants of Australia is Tetsuya Wakuda's Tetsuya's. One of Australia's most internationally recognised restaurants, Tetsuya's for the first time has dropped out of the World Top 50 and now ranks at number 58 in 2011. Previously it had been inside the the top 50 since the award's inception in 2002. At its peak it ranked number 4 in the world in 2005 and for 7 years has been the highest ranked Australian restaurant on the list. It has retained 3 hat status in the SMH Good Food Guide from 1992 until 2010.

The cuisine is a fusion of Japanese and classical French technique that consistently produces dishes of high quality. The menu may be regarded as more conservative and less bold than some of the other top restaurants in Australia but what is consistently delivered is almost perfect flavour and textural combinations. The dining area overlooks a serene Japanese garden and the friendly, informative service adds to a complete dining experience.


*Please note the provided menu and prices are only an example and may change at anytime, please refer to the restaurant's website for up to date information
< Number 9Number 7 >